A research-based approach led Spida Fix to the ultimate fixing... 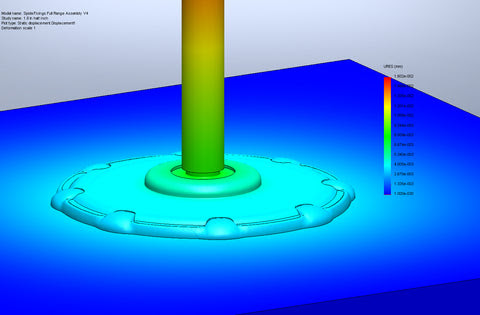 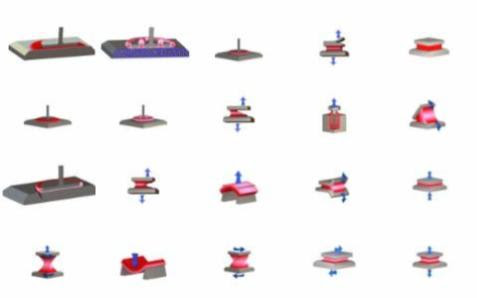 Admax is Spida Fix's proprietary treatment that has been specially developed to increase the bond strength of Spida fixings. This is no average surface treatment. Months of R&D have gone into developing a process that creates surface deformation to depths of around 20 microns. That is up to five times more than other fixing treatments. It maximises Spida’s surface area, surface energy and wicking properties, helping to achieve an unbeatable bond.

The advanced Admax technology not only deforms the surface but also creates microscopic undercuts, significantly increasing the mechanical strength of the bond. On Spida Fix's carbon steel fixings they use an advanced electroplating technique to protect and further increase the size of the undercuts.

The 20-micron deep undulations ensure a minimum bond-line thickness around the edge of concave bases and the bottom of flat based fixings.

The Admax surface treatment is designed in such a way that helps the adhesive spread across the surface of fastener without leaving air voids.

Not just a surface treatment

Spida bases have a 'castellated' circumference. This interlocks with the adhesive or binding polymer increasing torsional resistance. The edge of the base is where mechanical advantage is greatest and therefore the best location for this anti-torsion feature.

As well as improving torsional resistance the castellations improve the rheology of adhesive as it protrudes from the edge of the base which also improves its peel and cleavage strength.

Spida Fixings are designed to hold in place a threaded fastener that can be loaded up to its ISO breaking point without damaging the fastener, bond, substrate or the component connected to the fixing.

The 'parabolic elasticity' of Spida’s patented concave shaped base means that forces are not 'point loaded' into the centre of the fastener, instead they are dissipated across the entire base and beyond.

Stresses in the centre of the base are attenuated because there is space for more adhesive in the centre. Optimal tensile strength is also provided by a parabolic base, as this is the shape that a flat plate forms naturally when pulled in the centre.

This prevents premature adhesive or cohesive failure in the centre of the base and reduces the forces applied to the fastener, substrate and connected component, which means you can use less fasteners for the same job. Just think what that means for your product’s weight, cost and manufacture time.

We offer a range of fixings for different applications. Spida Fix fixings with flat bases are designed for welding and certain specialist adhesives (e.g. acrylics) that require minimal bond line. However, the more popular concave bases are better for most applications including bonding with epoxy adhesives.

Whether installing a bonded fixing by hand or using a jig there is a natural tendency for installers to press ‘hard’ when positioning it. This results in adhesive being squashed out from under the base leaving only a thin layer. Spida Fix's research has shown that when using an exothermic adhesive (i.e. adhesives that cure by creating their own heat when mixed) such as epoxy, this thin layer does not usually reach ‘peak exotherm’ (i.e. optimal temperature) under real life conditions and therefore the bond is not fully cured. This is why they developed Spida fixings with concave bases that retain the optimal depth of adhesive under them.

Spida Fix's concave base shape self-levels the fixing by forcing it to land level to the substrate even when loaded with a viscous adhesive. This is because the concavity retains a space for the adhesive whilst the edge of the base levels the fixing. This is one reason why Spida Fix recommend concave bases for exothermic adhesives such as epoxy. Retaining a similar level of adhesive under a flat base would make it difficult to ensure perpendicularity. The slightest deviation and the adhesive may not spread out evenly under the base leaving an area with less or zero adhesive, which will weaken the bond. Spida Fix therefore only recommend flat bases for welding and non-exothermic adhesives such as acrylics that require a minimal bond line depth of adhesive.

Also, if a concave base is accidentally overloaded with adhesive this can be more easily wiped away from the edges as the fixing is not ‘floating’ on a pool of adhesive like with flat based fixings.

A real-life example of polymer chain alignment is seen in a plastic shopping bag. Due to the way the bag is made the polymer chains are aligned in the direction of the handle, this makes it strong enough to hold by the handle but weak if you try to stretch the bag sideways (perpendicular to the polymer chains). With a fixing that needs to resist forces from multiple directions it is important that polymer chain alignment is avoided. This is why we only recommend flat based fixings for welding and specialist adhesives such as acrylic that require minimal bond line depth.

Only the best possible metals and finishes are used for Spida Fix fasteners.

The high tensile carbon steel products are made from Manganese Boron (20MnB4). This is a premium steel ideal for fasteners as characterised by its consistent mechanical properties, homogeneous structure, minimal dimensional tolerances and ease of use in cold forging and welding without cracking or necking. The bases of the carbon steel fasteners are made from CR4 which is ideal for progression pressing.

Stainless steel fixings are passivated to improve their corrosion resistance.

Spida Fix's passivation and plating is done by the top suppliers in Europe to ensure that their fixings achieve the highest standard finish for fixings.

Not all metals are the same. The crystalline microstructure within metals is influenced by the way it is manufactured and treated.

Spida Fix cold forge their fasteners and progression press their bases which enhances and aligns the metallic grain flow to provide superior strength. They also roll the threads onto their fasteners (rather than cutting, chasing or grinding them) which further improves the grain flow.

On top of this, Spida Fix carbon steel fixings are heat treated to resistance class 8.8 to increase their tensile strength and hardness.

Funded by the UK government and guided by Southampton University we spent 2 years designing the perfect fixing. Spida Fix approached the design work from the ground up, iterating through radical new designs and testing each before landing on the final product. By using finite element analysis (or FEA for short) Spida Fix could simulate how their designs would respond to real world stresses. Prototypes were then subject to extensive testing in their unique custom-built testing equipment and finally in real life applications.

Designing out the weak points

The weakest point of any male threaded fastener is just below the last thread. Spida Fix studs compensate for this by retaining as much material as possible at this point and gently tapering into the base. The optimised grain flow in this area also improves its strength. These factors allow more load to be passed through to the base.

The larger 35mm and 53mm Spida bases are fed onto the stud head and then autogenously welded from behind ensuring that as much of the two parts as possible are joined. This makes it impossible to pull the stud off the base or push it through, which means that Spida fixings can withstand forces up to the ISO breaking point of the thread.

From their rolled threads to their advanced welding machines, Spida Fix's manufacturing processes and quality checks ensure that every fixing attains a high degree of geometric accuracy. This not only allows you to construct products with more precision, but it also reduces the chance of fixing failure by reducing point loading and uneven bonding. 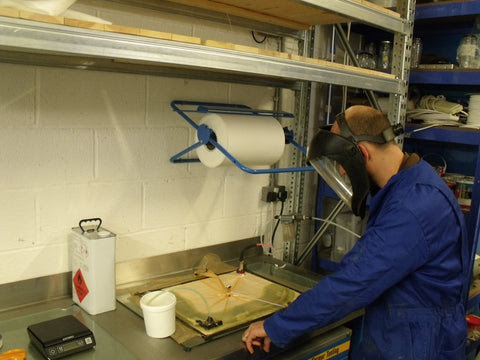 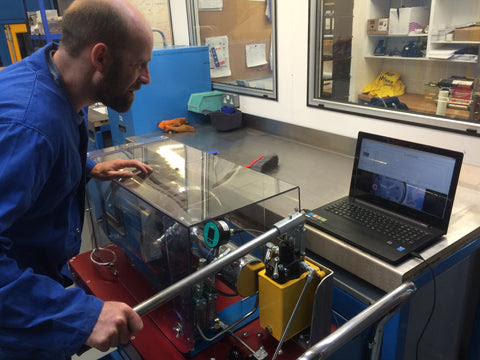 This privacy policy sets out how we, Australian Parts & Equipment, use and protect any information that you give us when you visit this website. Australian Parts & Equipment is committed to ensuring that your privacy is protected. Should we ask you to provide certain information by which you can be identified when using this website, then you can be assured that it will only be used in accordance with this privacy statement.

WE MAY COLLECT THE FOLLOWING INFORMATION THROUGH OUR ONLINE FORMS:

WHAT WE DO WITH THE INFORMATION WE GATHER

We require this information to understand your needs and provide you with a better service, and in particular for the following reasons:

We are committed to ensuring that your information is secure. In order to prevent unauthorised access or disclosure we have put in place suitable physical, electronic and managerial procedures to safeguard and secure the information we collect online.

Overall, cookies help us provide you with a better website by enabling us to monitor which pages you find useful and which you do not. A cookie in no way gives us access to your computer or any information about you, other than the data you choose to share with us.

At Australian Parts & Equipment we use traffic log cookies to identify which pages are being used. This helps us analyse data about web page traffic and improve our website for our customers. We only use this information for statistical analysis purposes and you, as an individual or company, are not identified in our traffic data.

From time to time we also use Google AdWords conversion tracking cookies. These do not collect or track personal information and expire in 30 days.

You can choose to accept or decline cookies. Most web browsers automatically accept cookies, but you can usually modify your browser setting to decline cookies if you prefer. This may prevent you from taking full advantage of the website.

LINKS TO OTHER WEBSITES

Our website may contain links to enable you to visit other websites of interest easily. However, once you have used these links to leave our site, you should note that we do not have any control over that other website. Therefore, we cannot be responsible for the protection and privacy of any information, which you provide whilst visiting such sites and this privacy statement does not govern such sites. You should exercise caution and look at the privacy statement applicable to the website in question.

You may request details of personal information, which we hold about you. If you would like a copy of the information held on you please write to us at the following address: